Western Christians in the late fourth or early fifth centuries summarized their understanding of God in what later came to be known as the Athanasian Creed. In this creed, the Father, Son, and Spirit are described as one God in Trinity, and Trinity in Unity, three “coeternal” and “coequal” Persons, each fully God but still one God, not three—so that they share equally in power and authority, and none is greater or less than another. Similarly, Augustine argues that what is said of one member of the Trinity can also be understood of the others.3

In seeking to bear witness to their belief that the God revealed in Scripture and in Jesus Christ is one and three at the same time, the early church rejected the idea that the Father, Son, and Spirit related to one another hierarchically and that there was an eternal subordination within the Trinity. With regret, we must warn that any view of the Trinity that posits an eternal subordination among the Persons of the Trinity, in spite of its best intentions, cannot do full justice to the evidence of Scripture, diminishes the magnitude and significance of the Incarnation, undercuts the unity of the Trinity, and tends to diminish the full deity of the Son and the Spirit. With the Athanasian Creed, we believe that confessing One Triune God in three coeternal, coequal Persons, each sharing eternally, equally, and fully in the honor, glory, worship, power, authority, and rank that belong alone to God, best represents the One true God revealed in Jesus Christ and in the Bible. We call on our fellow evangelicals, whether they wish to be known as egalitarians or complementarians, or no such label at all, to join us in this reaffirmation of trinitarianism that is at the core of historic Christian orthodoxy. 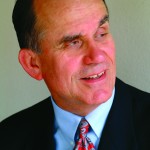 STAN GUNDRY is Executive Vice President and Editor-in-Chief for the Zondervan Corporation. He has served as a pastor and taught Bible, theology, and church history at Moody Bible Institute and Trinity Evangelical Divinity School. Stan served as president of the Evangelical Theological Society and on its executive committee as well as serving on the CBE Board, for a time as co-chair. Currently, he is also Adjunct Professor of Historical Theology at Grand Rapids Theological Seminary. He has published seven books and many articles.

Sign your name of support of the Evangelical Statement on the Trinity.

A biblical and popular exploration of “An Evangelical Statement on the Trinity,” by Stanley N. Gundry (107.9 KiB, 1,987 hits)